Construction work on Fort D began on August 6, 1861. Eight months earlier, few would have dreamed that the fort would have been a necessity. Tensions between the non-slave states and the slave states grew during the 1850’s and conflict spread along the Missouri and Kansas border. Secessionists in the southern states feared that a new president might move to control their institution of human slavery. In December of 1860 South Carolina seceded from the Union following the election of Abraham Lincoln in November. Southern states began seceding while taking control of US installations, but on January 8, 1861, Federal troops fired on and repelled forces advancing on Fort Barrancas, Florida. Despite years of disagreement and armed conflict, Kansas was admitted to the Union as a non-slave state on January 29, 1861. 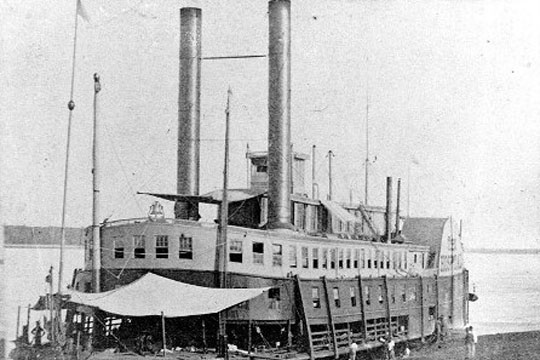 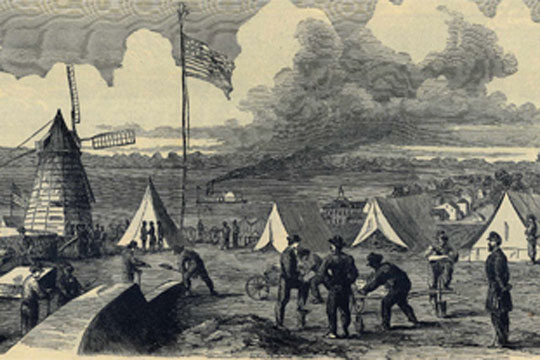 The first regular Union troops, members of the 20th Illinois Volunteer Regiment, landed in Cape Girardeau on July 6th, 1861. Rumors abounded as to the likelihood of the city being attached by secessionist forces. On July 28, 1861 General John C. Fremont ordered Captain Franz Kappner of the Corps of Topographical Engineers to Cape Girardeau to plan fortifications. On August 2nd, Fremont visited Cape Girardeau and the next day ordered Captain Henry Flad to Cape to aid in the design of the forts. A plan was submitted to Fremont on August 8, but work on two forts had already begun. On August 4th, Colonel C. Carol Marsh ordered the fortification of the Windmill Hill, which became known as Fort A. Engineer troops of Bissell’s Engineers of the West also arrive in Cape Girardeau to work on the forts. The engineers are mostly German immigrants living in St. Louis who volunteered to fight for their new homeland. Two days later, under the direction of Lieutenant John Wesley Powell, work began on what would be known as Fort D. 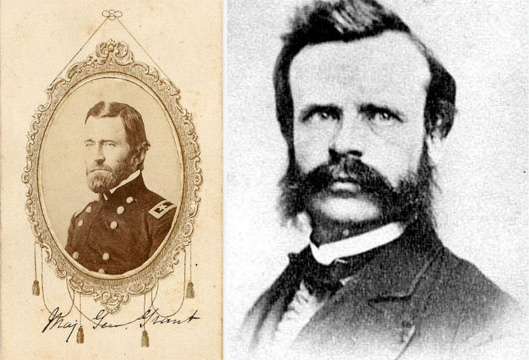 On August 30, 1861, General Ulysses Grant arrived in Cape Girardeau and took command. Grant visited Cape Girardeau again in October of 1861 and authorized Captain Powell to raise a company of local men to man the forts and guns. Battery F, 2nd Illinois Light Artillery was organized immediately but not officially mustered in until December 11, 1861. Throughout the fall and winter, Powell’s men train at the large guns and garrison the forts of the city. In late March, 1862, Battery F was sent to join the Army of the Tennessee at Pittsburgh Landing, Tennessee. During the battle of Shiloh on April 6, 1862, Battery F was heavily engaged at a spot forever known as the Hornets’ Nest. Captain Powell was wounded in the wrist and forearm; later, his arm was amputated above the elbow. Powell’s Battery F would go on to serve at Corinth, Vicksburg, and Atlanta, among other battles. 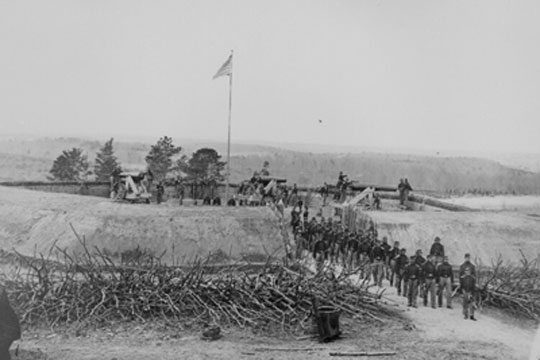 Cape Girardeau was attacked by Confederate forces on April 26, 1863. During this battle of Cape Girardeau, Fort B was involved in much of the fighting while Fort D was not attacked at all. The Confederate forces were easily turned away and Cape Girardeau remained a Union outpost during the war. During the summer of 1864, Union companies of free black men and escaped slaves, part of the 18th US Colored Regiment, were stationed in Cape Girardeau, including some who garrisoned the forts. In September 1864, as Sterling Price’s Confederate army moved into southeast Missouri, three of the forts at Cape were manned and new cannon emplaced. Fort D was deemed too far away from the downtown area to be of useful value, but in the end, Price never approached Cape Girardeau. In April and May of 1865, all Confederate armies surrendered and the war officially ended. After the war, the forts in Cape Girardeau were abandoned and all but one disappeared in the decades to follow.

In 1869 now-retired Major Powell got help from his old friend Ulysses Grant, now president of the United States. Using a small flotilla of wooden row-boats Powell explored the Colorado River and made the first descent of the Grand Canyon. Powell went on to work at the Smithsonian Institution, founded the Bureau of Ethnology, and became the 2nd director of the United States Geologic Survey.

In 1911 the land around Fort D was subdivided for housing; the subdivision was called “Fort D Highlands”. Citizens and the Southeast Missourian newspaper call for Fort D to be preserved. In June 1936, the Louis K. Juden Post of the American Legion purchased the fort as a public park for the city. The Works Project Administration agreed to perform restoration and improvements in the form of a replica powder house, while the City of Cape Girardeau agreed to maintain the project in perpetuity. 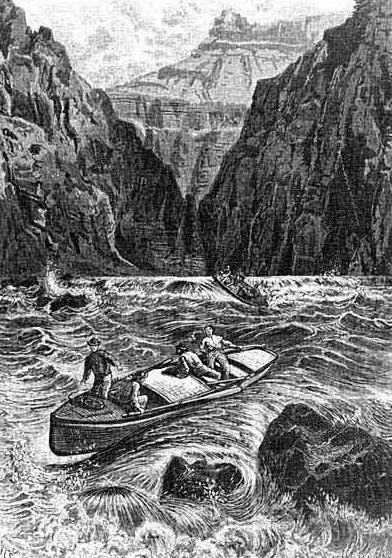 The work on the new powder house and fort was completed on July 26, 1937 and the American Legion used the building as a meeting house for several years. However, eventually the Legion moved from the site. From 1945 to 1948 the property was used by the Girl Scouts as a recreation center. In the middle 1950’s the powder house was used as a civil defense headquarters. In the late 1950’s and early 1960’s the building was frequently used as a private residence. From 1967 until 1975 the building and grounds were used as a senior citizens’ center followed by use in the mid-1980’s by the Junior Optimist Club. The building thereafter stood vacant and frequently vandalized. Major stabilization and improvements to the site began in 2005 with new interpretive signs, guided tours, and Civil War living history. 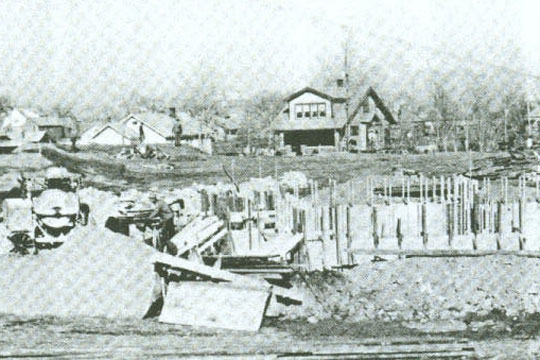 All interpreters and guides are volunteers and funding is provided by donations of visitors and friends.

Donations are necessary to the continued protection and interpretation of this unique Civil War site.

Use the Donate Button below to download a membership form and become a member of The Cape Girardeau Parks & Recreation Foundation to support our parks! 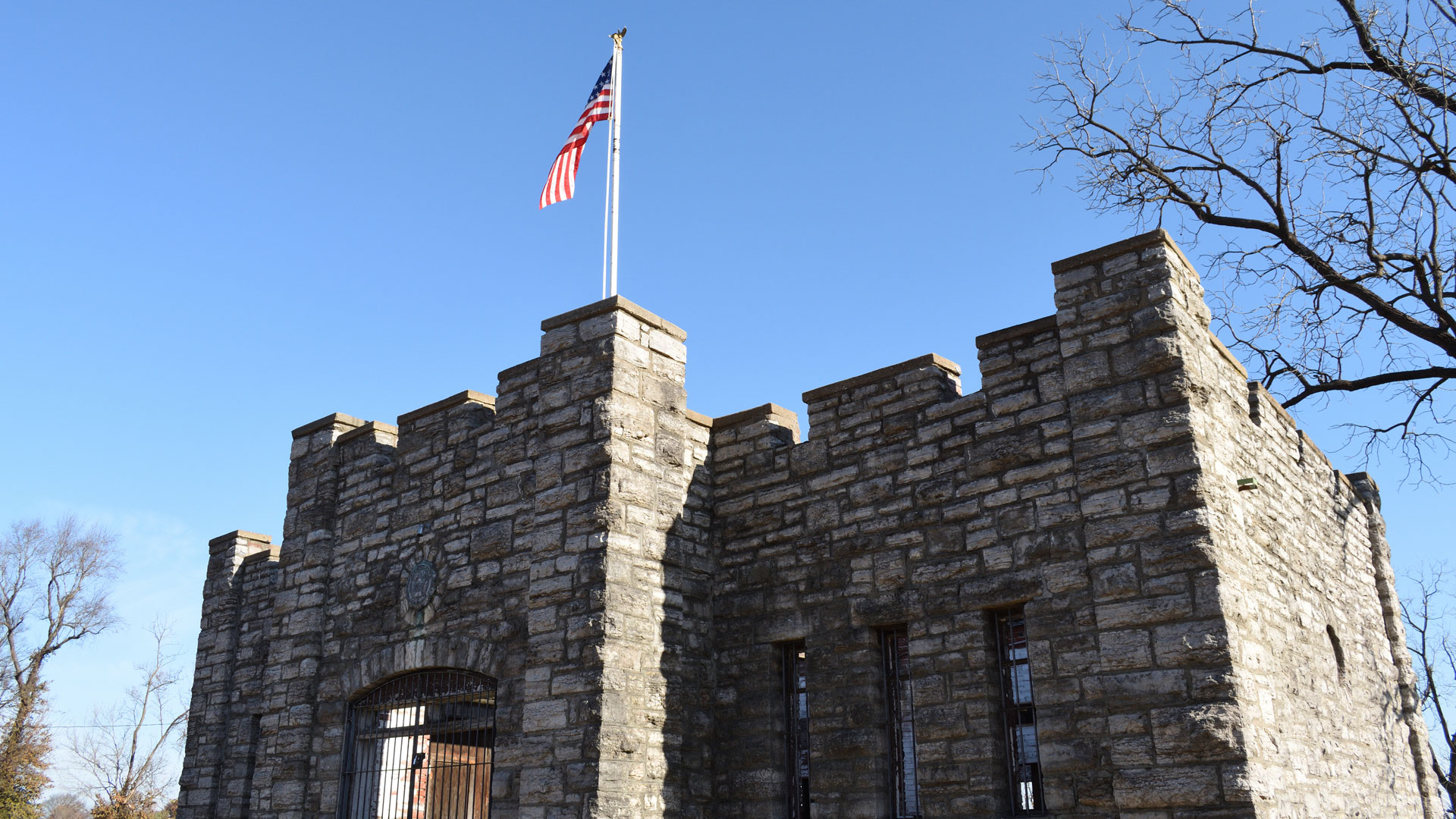